A Little Blood (Review: For the Sake of Vicious) 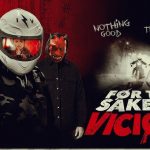 For the Sake of Vicious is streaming on Apple TV There’s one aspect of filmmaking that’s never gotten the respect it deserves. Directors are fawned over at film festivals. Actors are feted at the Academy Awards. Hell, even lowly screenwriters have websites, publications, and festivals honoring their achievements. But year after year, stunt performers are consistently ignored.* We all know that a big reason for that is due to marketing. Studios want us to watch an action extravaganza and believe that Arnold/Tom/Will/Chris/Chris/Chris are doing all their own stunts. It’s true that some actors... Read More