Home » Reviews » Movie Reviews » Be Excellent To Each Other

Be Excellent To Each Other 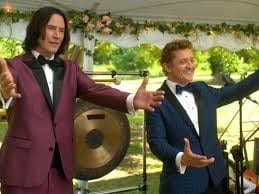 Bill & Ted Face the Music is streaming on Prime

Let’s talk about trilogies. Specifically, how unbelievably hard they are to pull off. It’s difficult enough to pull off a good movie, considering you need a strong script, solid direction, and competent actors. To pull off a decent sequel, you need to build on the world you first established and go in a new direction yet one that’s not so new it undoes the first film. To do all of that, and add a third film wrapping up everything? It’s easier to climb up Mount Everest blindfolded and naked.

Even the most prestigious and profitable franchises have trouble with this. Consider that:

Years of merciless bludgeoning at the hands of greedy, incompetent, or misguided filmmakers has taught us that the third entries of a series usually blows chunks. When a film comes out that defies the odds…well, it can be a little breathtaking. The insane part isn’t just that Bill & Ted Face the Music is a trilogy-capper made with intelligence and deep silliness. No, the insane part is that it’s the end of a trilogy that gets better with every entry. This trilogy never drops in quality. 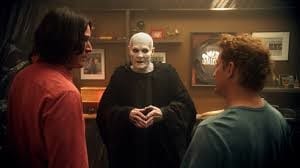 To bring you up to speed, Bill & Ted’s Excellent Adventure concerns Bill S. Preston, Esquire (Alex Winter), and Ted “Theodore” Logan (Keanu Reeves) a pair of high-school himbos living in San Dimas, California. To pass a critical history test, they get their hands on a time-traveling phone booth, gain a futuristic mentor in Rufus (George Carlin) and meet a wide variety of historical personages. A few years pass, and in Bill & Ted’s Bogus Journey, the guys are killed by their evil robot duplicates, sent to Hell, befriend Death (William Sadler), and learn their true destiny; to write a song capable of uniting humanity.

So much for that. Years have passed, and the guys have failed to write The Greatest Song In The History of The World. Their fame has flagged, and they’re reduced to playing weddings. Their marriages to the princesses Joanna (Jayma Mays) and Elizabeth (Erinn Hayes) are also in bad shape. An amusing scene in marriage counseling shows us that Ted & Bill** need to be together constantly, even during therapy.

There’s good news and bad news, though. The good news is that, somehow, the guys managed to procreate. They’re the proud papas to Billie (Brigette Lundy-Paine) and Thea (Samara Weaving). The bad news is that since Bill & Ted’s band Wyld Stallyns failed repeatedly in writing The Song, reality itself is beginning to collapse. Kelly (Kristin Schaal) is the daughter of Rufus, and she arrives from the future to tell them that now would be a good time to get in gear and write The Song.

Bill & Ted Face the Music never leans hard into nostalgia. It never feels like a cheap cash grab. Instead, it’s like getting snuggles from a dopey Golden Retriever. The dog might not know his name or what the word “sit” even means, but he’s a sweetheart who’s all about wanting to show you how much he loves you.

Each of the three films in the Bill & Ted trilogy was helmed by a different director.*** Of the three of them, Face the Music’s Dean Parisot has made the most polished installment. As the director of the second-best Star Trek movie of all time, Galaxy Quest, Parisot has the skill to make this kind of tomfoolery look good. While the pacing drags just a little in the first half-hour, once the film gets going, it moves at a breakneck pace. 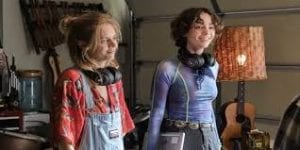 You have to be very smart to write characters that are this kind of dumb. Screenwriters Ed Solomon and Chris Matheson are, and as the writers of all three films, they know exactly when to go up to the line. Their script is gloriously silly. Multiple characters travel through numerous timelines at the same time, but Matheson and Solomon always make sure we know what’s happening and when. Better yet, the script is infused with infectious optimism. The idea that friendship and a kickass song can save the world never feels cheesy. Instead, it feels right. Along with that blast of hope, there’s a blast of self-awareness in this script. Bill & Ted are two guys told over and over in the first two films that they were special, beautiful and unique snowflakes. In Face the Music, they have to reckon with the fact that their life plan didn’t work out. Instead of doubling down and trying harder, we see their perspective shift. They grow and change. That’s what good writing is all about.

With 29 years between installments, you can be forgiven for wondering if Alex Winter and Keanu Reeves can smoothly step back into these iconic roles. A great deal has changed for them. Reeves has become the greatest action star in American movies, while Winter has made a number of outstanding documentaries. Winter’s return is a little smoother as Bill, and he’s just as goofily charming as ever. Reeves is a bit stiff as Ted, but he’s just as game as ever to get ridiculous. Perhaps my favorite performances were Samara Weaving and Brigette Lundy-Paine as Thea and Billie. They go beyond imitating Reeves and Winter and are an effective comic duo in their own right. Speaking of which, William Sadler returns (and very nearly steals the show again) as Death. Sadler has such a willingness to do absolutely anything to make us laugh. He’s so good at comedy that I wish he’d do more of it. Kid Cudi plays himself, and his comic timing is precise and perfect. There’s not a false note in this cast and everyone shows up to play. 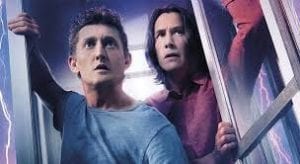 As much as I love the film, it’s not perfect. It takes some time to really get into the groove, and it’s hampered by some problematic pacing. Speaking of problematic, let’s talk about the character of Grom. She’s a cavewoman, and she’s played by Patty Anne Miller, a wildly talented drummer who’s worked with Beyoncé and CeeLo Green. Someone with the chops that Miller has should absolutely be celebrated. The film choosing a superband with a majority of POC (Jimi Hendrix, Louis Armstrong, Ling Lun, and Mozart, along with Grom.) is cool. But having a Black woman play that particular role, a cavewoman? Eh…not a good look. Swap her out for someone like either Sylvia Robinson or Sister Rosetta Tharp, and you have something excellent.

Bill & Ted Face the Music is more than a skillful way to close out a beloved franchise that doesn’t quite get the respect it deserves. It’s a guitar riff of delightful, positive energy that had me smiling for nearly the entire run time. While there’s a lot to be cranky about these days, Bill & Ted reminds us that we can face the future with a cheerful grin.

*Though the freeway chase in Reloaded is genuinely cool.

***Stephen Herek directed the first film and went on to a long and steady career as a journeyman director. Peter Hewitt directed the second film and immersed himself in family films, for the most part.

Tim Brennan
Tim has been alarmingly enthusiastic about movies ever since childhood. He grew up in Boulder and, foolishly, left Colorado to study Communications in Washington State. Making matters worse, he moved to Connecticut after meeting his too-good-for-him wife. Drawn by the Rockies and a mild climate, he triumphantly returned and settled down back in Boulder County. He's written numerous screenplays, loves hiking, and embarrassed himself in front of Samuel L. Jackson. True story.
Tagged: Movie ReviewTim Brennan
OnNewOrleans.com is a directory and information guide for New Orleans, Louisiana.
Discover the best of New Orleans shopping, restaurants, night life, breweries, events, business, outdoors, fun, local life, real estate, transportation, jobs, and schools.
Looking for what to do in New Orleans? OnNewOrleans.com has columnists, and bloggers to keep you up to date on the best of New Orleans, Louisiana.