You’ll Foster Good Will Towards The Latest Video You Deserve

It’s Monday, and it’s time once again for The Video You Deserve.

Now, the past several videos we’ve featured have all been vintage stuff from the ‘80s, which, arguably, is the golden age of videos. Back then it was the wild west, there were no real rules, and imagination and strangeness ruled.

As time went on, videos began to become more cliched and certain elements came up so often that we needed Beavis and Butthead to parody them.

And once the reality TV plague set in, and every good-looking moron became a recording star, and MTV pretty much stopped playing videos in lieu of reality TV, the medium took a major step back.

But still, there have been some awesome vids to come out in the past couple decades. And one of them is the one we’re featuring today.

Now, I absolutely LOVE Foster The People. They’re one of my favorite contemporary bands, and their debut, Torches, is maybe my favorite album of the last decade. But aside from that bias, there’s no denying that our video today, by that band, is terrific. 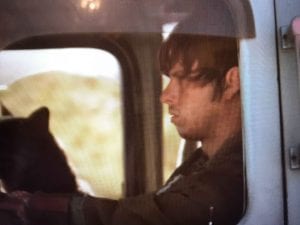 Mark Foster leaving a dystopian LA, and his shaving products, far behind.

The song is the opening track on Torches, and helped establish the band worldwide. It was a hit in Britain, Australia, Canada, Mexico and the band’s native U.S., where it was the fifth-most played song on Spotify in 2011.

The inspiration for the song was initially oblique in regard to the lyrics and dichotomous to its upbeat, poppy music – not surprising given that much of Foster’s music is relentlessly poppy before revealing a darkness to the lyrics. After all, their breakout hit, “Pumped Up Kicks,” was a fun, funky, hooky dance tune about school shootings. 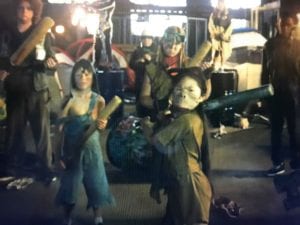 Needless to say, the parents had a difficult time finding daycare.

According to songwriter Mark Foster, the song was about the prevalence of drug addiction and culture, and irresponsibility in Los Angeles, taking a dig at a lot of the trust fund kids and celebutantes who were glamorizing it.

As for the video?

Well, obviously there’s more than a little symbolism tying it to the lyrics, as Foster finds himself leaving an apocalyptic Los Angeles as a set of scenes crossing “Mad Max” with “Lord of the Flies” unfolds, with Foster kidnapped and ultimately placed in a devious sci-fi scenario with a twist ending.

And I hope you do, because, here’s “Helena Beat,” by Foster The People, The Video You Deserve…

Sean Leary is an author, director, artist, musician, producer and entrepreneur who has been writing professionally since debuting at age 11 in the pages of the Comics Buyers Guide. An honors graduate of the University of Southern California masters program, he has written over 50 books including the best-sellers The Arimathean, Every Number is Lucky to Someone and We Are All Characters.
Tagged:
OnNewOrleans.com is a directory and information guide for New Orleans, Louisiana.
Discover the best of New Orleans shopping, restaurants, night life, breweries, events, business, outdoors, fun, local life, real estate, transportation, jobs, and schools.
Looking for what to do in New Orleans? OnNewOrleans.com has columnists, and bloggers to keep you up to date on the best of New Orleans, Louisiana.