Listen, I’m not going to say that Kanye West dropped out of the race for President of the United States just because I announced I was running. After all, I’m writing this, not reading it out loud.

But I do find it coincidental that after I announced I was running for president last Friday, within days, Kanye suddenly dropped his 2020 campaign.

Kanye announces his brief run for president before backing out because he’s scared of running against me.

Kind of like a lot of other behavior by famous folks lately.

Perhaps you’ve been hearing about some of it. Certain big-name celebrities have been shockingly AWOL the past few months.

All of these huge stars and more – Jimmy Kimmel, Oprah, Steven Spielberg, Gary Coleman, Harry Potter (if he existed), the Quaker Oats guy, etc. – have been dubiously off the radar for most of this year.

Now, some people who have been “brainwashed by the corporate media” (i.e. people with common sense and other things to worry about; significant others that they prefer to have sex with rather than spend time on the internet; lives, etc.) might say that they haven’t been seen because of the covid pandemic shutting down most of the entertainment world. Especially Pauly Shore. And the Quaker Oats guy.

But those “sheeple” don’t know what they’re talking about.

According to a clandestine group of internet warriors, all of these disappearances have been tied to a mysterious and insidious conspiracy called Q-Anon.

No acid was consumed in making this logo, courtesy of the late, great, Richard Weis.

Now, for those of you unaware of Q-Anon (i.e. people with common sense and other things to worry about; sex lives, etc.), it’s a popular conspiracy theory that’s been sweeping the Interwebs.

According to the theory, hundreds, maybe thousands, of celebrities are part of a secret cult of pedophile devil-worshippers running Hollywood. Allegedly these celebrities have finally been caught and are being brought to justice for their crimes and are all currently under house arrest, which is why they haven’t been seen in public that often. They’re also allegedly lying and saying that they’re in quarantine for covid, but in reality, they’re under house arrest for their terrible crimes. Friggin liars.

Q-Anon is a heroic anonymous figure on the inside who has discovered all of this and, with the help of his trusty sidekick Donald Trump (no, seriously, I’m not making this up), is helping to destroy the cabal and throw the criminals – including celebrities like Lady Elaine Fairchild, Dora The Explorer, the polliwog from Gullah Gullah Island, Hillary Clinton, and Wilfred Brimley – into jail.

Well, not to be outdone, I’ve been working towards similar ends, under the code name S-Anon, with many of the same celebrities, to condemn them for their horrible crimes against humanity.

We’ll start with Tom Hanks, who has jammed his work with occult symbolism, giving away his demonic leanings. After all, here’s a guy who got kinky on national television and spanked twin demons on the buttocks while being dressed up as a sorcerer named “David S. Pumpkins.” While many might think the S. stands, blatantly, for Satan, it’s a little-known secret that the S. is actually short for “Sssssss,” which is the sound a snake makes, and in the Bible, the devil shows up as a snake. SEE, PEOPLE!!! THESE EVIL CULTS ARE MUCH MORE SUBTLE THAN THAT! You’ve got to look BEYOND the obvious things like Hanks being in movies called “Inferno” and “Angels and Demons” and instead look to the devious symbolism and undercurrents in his other movies, like “Bachelor Party,” which stars a guy named Nick the Dick, who, I learned, is NOT a detective. 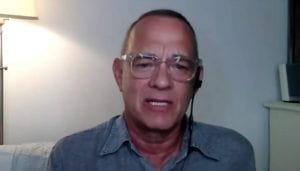 This man is evil.

For example, Hanks also once starred in “Sleepless in Seattle,” which seemed like it was about a lonely guy looking for love, but was really about a Seattle late night radio host being terrorized by a man afraid of the fact that he was a werewolf who was also in a grunge band; “Philadelphia,” which was actually about a haunted philly cheesesteak sandwich which would give people severe indigestion and GERD symptoms; and “Joe Vs. The Volcano,” which was actually about a secret society named J.O.E. (I don’t think it stood for anything, they just thought it seemed cooler like that) which was trying to take over the world through the hoax of climate change and fake volcano eruptions to bring about a one world government.

Ellen, well, for the past several years, she’s been making celebrities come out and dance on her show, and as the good people of the town in “Footloose” can tell you, dancing gets you nowhere but hell. Also, Ellen once starred in a movie called “The Love Letter,” which was about a love letter she wrote to none other than the devil on the side of the box of the candy Red Hots. Now, some people (SHEEPLE) might look at that letter and say that it’s nothing more than an ode to a sweet little cinnamon candy with just the right amount of zing, but I think we know better, that it’s all code for her amore for Beezlebub.

As for Oprah, it’s a little known fact that there’s been a secret code in all of her book club selections and if you decipher it just the right way, it says “Live, Laugh, Love Satan.” In addition, she also introduced the world to the twin necromancers Dr. Oz (symbolic of the Wizard of Oz, which was about a rich elite who used a demonic entity to control the land of Oz), and Dr. Phil (symbolic of the Magician of Phil, which was about a nebbish named Phil who lived with his grandma and had a cape that smelled like Ben Gay and who did shows down at the Elk’s Lodge using a magic kit he got in the mail from Doug Henning. He tried to grow out a mustache and afro like Henning but he just couldn’t pull it off, and his magic career went nowhere. So he became a serial killer! And now you know… THE REST OF THE STORY), and gave her audience free cars, which we all know cause several accidents each year and contribute to global warming. Nice job, OPRAH!

And then, there’s Maude.

AND THEN THERE’S MAUDE. 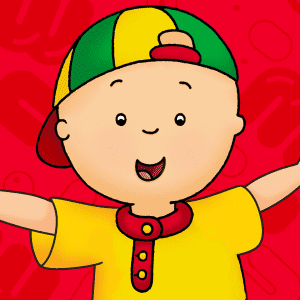 And those are just the tip of the iceberg. As Q and S have discovered and uncovered, the corruption runs very deep in this nationwide, nay, worldwide, web of evil. And only through our diligent efforts, along with our faithful companions Kanye West and Donald Trump, can we root it out, bring it to light, and throw it in jail to blaze a bright new path of goodness and light in our world! It’s only through cutting off all the tendrils of this beast that we’ll finally be able to get to the head, the core of all the world’s evil, the one demonic source of all terrible things in this world, which needs to be eradicated in order for us to bring the earth to salvation and a bright new era.

You know that evil.

You know that darkness.

You know that most sinister being which needs to be eradicated.

Of course, I’m talking about Caillou.

Sean Leary is an author, director, artist, musician, producer and entrepreneur who has been writing professionally since debuting at age 11 in the pages of the Comics Buyers Guide. An honors graduate of the University of Southern California masters program, he has written over 50 books including the best-sellers The Arimathean, Every Number is Lucky to Someone and We Are All Characters.
Tagged: ColumnSatireSean Leary
OnNewOrleans.com is a directory and information guide for New Orleans, Louisiana.
Discover the best of New Orleans shopping, restaurants, night life, breweries, events, business, outdoors, fun, local life, real estate, transportation, jobs, and schools.
Looking for what to do in New Orleans? OnNewOrleans.com has columnists, and bloggers to keep you up to date on the best of New Orleans, Louisiana.